About three years ago Fanatec launched a pretty solid wheel, in my opinion, great for Xbox users that really want to kick start in the sim racing world, the CSL Elite Steering Wheel P1 for Xbox One has 30 cm diameter which is a perfect size for this type of wheel, realistic, ready to use and very low weight only 970g, also features buttons with Xbox One symbols that happen to be interchangeable with the included racing style buttons. The best part of all? Compatibility, Works with Pc, Xbox One, and Ps4 ready.

Note: This product becomes compatible with PlayStation 4 and PlayStation 5 systems when combined with a PlayStation-licensed Wheel Base.

This product is compatible with Xbox One and Xbox Series X|S.

This product is compatible with PC

Ok, I’ve said that feels solid, has a great price, you can use it with Ps4 and Xbox one, but on a darker side it doesn’t feel high end, is kinda basic of course the price is amazing, I never get tired of saying it but if you´re looking for luxury this one is not yours.

In the other hand if you´re feeling like spending a little bit more but without exaggerating (because you don’t have anything in place, and are a newly simracer) this competition pack is amazing, is an elite version ready to race that includes the ClubSport Wheel Base V2.5, CSL Elite Steering Wheel P1 and CSL Elite Pedals great for new users. 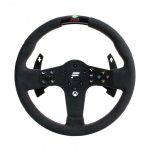