Nice curves, soft and smooth skin, gorgeous, very pleasant and with a very attractive look I’m not talking about my dream girl, I’m talking about the new ClubSport Steering Wheel Formula V2.5 X, this Fanatec newborn is officially licensed for your PC, Xbox, and PS Systems. with a design very Formula 1 style the wheel has the usual Alcantara leather grips and is completely made of metal and carbon fiber, highlighting the 5mm carbon fiber front plate.

The wheel rim has 11 buttons (Like the new Direct Drive Podium Racing Wheel F1), Funky switch to change settings, rocker switchers, an analog joystick, also features and OLED display, advanced RevLEDS and two FlagLEDS to show any problem with the tires, fuel level or radio messages. Amazingly more than 50 functions of the game can be adjusted directly.
All these amazing functions come with a price of $399.95

Compatibility Notes: Any racing wheelbase attaches to this rim will be Xbox One® and Xbox Series X compatible. On your PC the full compatibility is granted like many others Fanatec Products, they are coming from the factory with Native PC compatibility. On PS4 and PS5 the compatibility can be limited (subject to firmware/OS changes and developer support). As we mentioned before, The full functionality can only be guaranteed on PC.

Compatible to a wide of bases

Is the Fanatec Formula V2 worth it?

Yes It does, we think is one of the best F1 style steering wheels out there, The Formula V2 is a kind of upgrade for your Formula Carbon Wheel , In general terms comes with a lot more improvements from its predecessor, For this version Fanatec adds new rotary dials, improved screen, new thumb encoders, and more buttons and LEDs.

Like we said before Fanatec adds new rotary dials, improved screen, new thumb encoders, and more buttons. If you compare them side by side I think the Formula V2 is definitely with more features, full of flashy colors, and what’s more important for us, we think It will increase your sim racing experience and fun.

Is the Formula V2 better than the F1 Esports steering wheel?

That’s a tough question, but If you like steering wheels full of extra buttons then go for the Formula V2. Yet if you are thinking of saving some money without losing features, go to the F1 esport This steering wheel is the first one offering FULL compatibility with the Xbox One Console and with Windows 10, The good thing about this wheel is that It can be attached to any Fanatec product , I mean ” Any”, Including just to name a few, the CSL Elite Wheel Base, ClubSport Wheel Base V2.5, or Podium Series Wheel Base and of course all other Fanatec ecosystem products.

Besides that, this Steering wheel comes with a tome of features and fun functionalities, like the 11 buttons, multi-position switches, rocker switches, rotary thumb encoders, and OLED display.

If you are an F1 Die-hard Fanatic I think this is the way to go, Yes It’s cost a lot of money but I think worths the money. 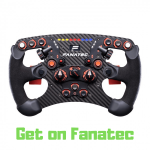