Good news for the rally racers and die-hard WRC players, On Sep.3 Fanatec release the new racing wheel, Officially licensed by the World Rally Championship (WRC) and ready to be used by the official WRC Esports competitions.
This product comes from factory ready for your Xbox One and PC, for other consoles like PlayStation you will need to grab the PS4 and PS5 version of this product.

The main difference between the two version lies in the servo base used, in the Xbox version they use the CSL Elite Wheel Base V1.1, unlike in the Playstation version that they use the CSL Elite Wheel Base +, and of course prices, this one is cheapest than the PS4 and PS5 version.
In terms of performance, this racing wheel is perfect for mastering the most demanding rally stages and mastering games like WRC, Dirt Rally, and even ProjectCARS.

One thing I really like about Fanatec is the re-use of products in their ecosystem, this particular wheel like many other is a combination of two good products, the well-know CSL Elite Base and the NEW RELEASE WRC rim, this is good for current customers looking to improve their setup with new add-ons like the WRC rim.
At the end, we need to wait until the Availability date on Nov 22, 2020, to determine if this mid-range racing wheel can be the official WRC Esports competition racing wheel.

Compatibility Notes: The CSL Elite Racing Wheel WRC for Xbox One & PC is compatible with Xbox One® and Xbox Series X|S out-of-box. in PlayStation®: This product is not compatible to any PlayStation® console and cannot be upgraded to achieve compatibility.

New kid on the block, the new CSL Elite WRC racing wheel is a nice addition for any CSL setup or even for Clubsport current users, I know it was produced for rally racers but it can be used with another racing styles.

CSL Elite WRC For Xbox One and PC 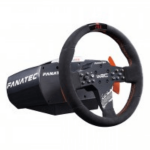