WRC 9 has just been released as well the new WRC officially licensed wheel from Fanatec, launched on 3rd Sept in line with the new game, so far there is not officially support for this game but fur sure it will be in the next months to come, you can preorder this product in the Fanatec website for 599$ not that bad price for what you get, as far as I know, this wheel is the only wheel officially licensed by the World Rally Championship (WRC) and is ready to be used exclusively in official WRC Esports competitions.

Compatibility Notes: The CSL Elite Racing Wheel WRC PS4 is compatible with Xbox One® and Xbox Series X|S out-of-box.  PlayStation® systems: All PlayStation®4 and PlayStation® Pro systems. and of course with the new PlayStation 5.

This base is a well know base on the Fanatec Ecosystem, is one of the oldest products in the available series, but don’t get me wrong not for anything is one of the best buy products ever, this base is a nice combination of good quality with a mid-range price, perfect for delivering an Ultra-strong brushless servo motor up to 6Nm of torque, not the strongest at the market, but suddenly enough for must of us. What worth mention is the rotation, very important for this type of racing style, with this you can rich at 1080° which can be adjusted in the Tuning Menu of the attached steering wheel.

One of the newest steering wheel on the market, this product is Officially licensed by the World Rally Championship (WRC) and was created for being the official WRC Esports competition wheel. And as you guess at this point is Perfect for rally racing. We have a full review of this wheel here, but what worth mention right out the bat is the Realistic size of (300 mm diameter) very important for this kind of racing style and the Integrated RevStripe™ perfect for featuring telemetry data speed or gears.

The CSL Elite Steering Wheel WRC features a Rally-inspired design and creates with a purpose in mind being the officially licensed racing wheel for Rally competition. IF you think twice this is a high goal for a middle-range wheel but we will see, for what concerns right now I think will be a nice addition for your simracing experience. 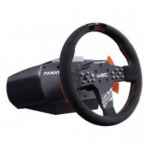