New kid on the block, officially licensed WRC steering wheel is a must-have for rally driving, fully compatible with PC, and the new gem Xbox Serie products, of course, these new steering wheels are coming from the factory with 13 buttons in total and a new Funky switch style that made this rim extremely configurable along with the extra set of buttons for you PC.

This steering wheel feels good in hands, the genuine Alcantara® grip is quite good and looks really like a professional rim. What makes this steering wheel REALLY interesting is in the back, You are a witness o the new Fanatec Quick Release systems. Note: The CSL Elite WRC becomes compatible with PlayStation systems when combined with a PlayStation-licensed Wheel Base. A die-hard fan of WRC? Planning to jump into the Esports competitions? Then this Steering wheel is a must-have in your inventory, The new CSL Steering Wheel WRC is officially licensed and perfectly created for mastering the most demanding rally stages. 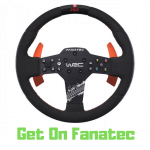