This will be short, the steering wheel GT Alcantara V2 is entire the same wheel as the GT style steering wheel but in genuine Alcantara® and with a striking lime green accents that add a splash of color, I really like the color in the cross-stitching, it´s a real upgrade from the white in the Suede leather version.

same product were my main thoughts when trying this steering wheel, we all know is a variation on the popular ClubSport Steering Wheel GT specifically a bundle of the new ClubSport Universal Hub V2 for Xbox One and the ClubSport Wheel Rim GT Alcantara.

At the end it was a great experience the functionality is okay, with a diameter of 33 cm that can be adjusted to a variety of GT cars and of course the rim is made in brushed and anodised aluminium and covered in genuine Alcantara ideal for a wide variety of GT cars.

Makes sense buying this machine? lest find out…

This video is an unboxing of the Clubsport Steering Wheel GT, yet you will get the idea of what you will get if you buy the Alcantara edition.

Note: This product becomes compatible with PlayStation 4 and PlayStation 5 systems when combined with a PlayStation-licensed Wheel Base.

The full functionality can only be guaranteed on PC; this is also game-dependent.

If you’re a big race fan Project Cars series is the way to go, It has a dizzying array of cars including real-world GT3 cars, Much like Project Cars, Gran Turismo Sport features a huge array of cars and tracks and matches perfectly with this Clubsport product. Here is our complete list of games. Worth the 440 $ you will spend on this product?  Well, the answer is, depend, Are you making an upgrade from the “last version” to this new version? if It is your scenario, I think not, Don´t get me wrong with this rim you will get a lot of fun driving GT title yet there are not enough reasons for me to spend 400$ just for new lines in lemon colors and an Alcantara cover.

On the other hand, if you are new to GT this product is a truly beautiful steering wheel, I was impressed with the realism you get and how lightweight it is, if you wonder about the performance let me tell you is very good also amazing smoothness and force feedback strength and feel. 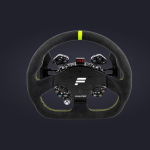