Another product in the GT Line from Fanatec, this time the Official Forza Motorsport Racing Wheel, is designed and developed for FM6 and other titles of the “Forza” series. This product is a bundle of two good products, the ClubSport Wheel Rim GT “Forza Motorsport” and the Clubsport Universal HUB V2. the RIM itself is covered in genuine smooth leather with white stitching.

Cleary this RIM is for a small niche, die-hard GT Forza Motorsport Fans, or at least you like racing GT Games, As you might know from other reviews we made, GT style is one of the most popular racing styles out there, not for nothing Fanatec has its own set of equipment officially license for them. The full list can be rich at the end of this post.

I really like in general de GT series, but whort buying just the RIM? Note: The functionality of this product on Xbox One or PS4 can be limited by the capabilities of the console, the full compatibility can be only guaranteed on PC. This is the official Xbox One steering wheel for Forza Motorsport, any more reason to buy this rim? Think not, but don´t get me wrong, if you are planning jumping into GT sim you need to be clear what you need first play to have a full experience in place, If you have nothing in your hand, better you buy a full sim racing wheel like GT motorsport, yet if you are just testing GT in your current setup. buy this product.

Worth buying just the RIM?, sure but depends on the stay you are in right now, do you have a Fanatec Base in place? or you are just buying the all system? If you are making an upgrade I think is a nice addition for you. if you are new better look some else place 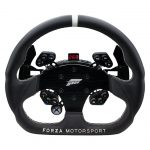