Basically this product was created to get the full advantage of the Podium new technologies but for the Clubsport line users. with this steering wheel you can test what the Podium line looks like without making expensive upgrades

What stands out the most about this rim is the cover in premium smooth leather and gold stitching. The other thing is the diameter; 30cm, making this wheel a good all-rounder, suitable for many vehicle types. If you are looking for an any-type of racing styles addition this steering wheel might be your best selection

This video is for the Podium R300 RIM, but as you might guess already the Clubsport Steering Wheel R300 comes from factory with this RIM. Notes: A connected Fanatec wheelbase will become compatible with the Xbox One and Xbox Series X|S if it’s connected with the Universal Hub V2.

The full functionality can only be guaranteed on PC; this is also game-dependent. On PlayStation Consoles the Clubsport 300 is compatible if you use a Fanatec Wheelbase compatible with Playstation systems. The Podium-grade, 300 mm diameter rim, is for sure stylish and with a multi-purpose racing style in mind, The new addition in this V2 “Version” is the Clubsport HUB V2 in which you can attach nearly any steering wheel in the Fanatec Ecosystem, This new version comes rewind with tones of improvement on electronics, magnetic shifters, and an exchangeable quick release system, For all of those, I think the Clubsport V2 for the Xbox systems in a good multi-purpose wheel any Fanatec Fan should have.

Is the wheelbase included?

No, In order to operate this product, a compatible Fanatec Wheel Base (not included) is necessary. This is going to be a short one, and an easy decision for me, I love this steering wheel, the premium smooth leather, and gold stitching covering the rin are amazing, with this steering wheel in your hands you can get the full advantages for Podium but at a more reasonable price, making it perfect for Clubsport users looking to add a new multi-purpose rim for their collection. 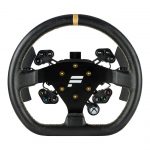