NEW NEW Steering Wheel on the town !! , In theory, is a refinement from the old Mclaren GT3 Steering Wheel, (let’s call it the V1 Version), Yet this one is full of new cool improvements and features.

Once again we found a clear path that Fanatec is taking with their new wheels, Make them as possible as an exact replica of the real racing wheel car, this time was not an exception on the Mclaren GT3 V2. Including the full-size, detailed reproduction of the steering wheel used in McLaren GT3 race cars, The overall shape, as well as the size of the switches, paddles, and dials, are based on original McLaren CAD data.

Regardless of the not too many improvements in the exterior design ( That looks almost identical to the V1 version ), We expect big things with this new release for one reason, this Steering Wheel comes at a very good price in the pre-order state, just 200$ for a very good steering wheel full of functionalities.

If you are thinking of upgrading your old Xbox or PS4 system this is a nice addition for your new setup as well, at least if you are an F1 or GT3 Die-hard lover.

The CSL Elite Steering Wheel McLaren GT3 V2 is a refinement of the original, with redesigned electronics for improved performance and durability. The fourth rotary encoder of the real GT3 wheel is replaced by a white, 1” OLED display. The shifting mechanism is completely revised, with a longer throw and magnetic resistance for superior tactile feedback. The rocker-type paddle is made from a single piece of anodised aluminium, allowing up and down-shifting with one hand.

Xbox: If connected with this steering wheel, the above-mentioned wheelbases will be compatible with Xbox One® and Xbox Series X|S.

PC and other platforms: The specifications of the compatible wheel bases will remain unchanged.
The functionality of this product on Xbox or PlayStation can be limited by the capabilities of the console (subject to firmware/OS changes and developer support).

The full functionality can only be guaranteed on PC; this is also game-dependent.

It’s the same steering wheel as the V1?

We think not, this steering wheel comes with redesigned electronics in mind, truly a 1:1 reproduction of the real racing car McLaren 720S GT3, McLaren itself supplied Fanatec with the CAD data for its real-world product.

What are the main differences? We are very glad McLaren GT3 wheel is back, if you’re a loyal fan of the German brand, this steering wheel might just look a little familiar for you. Fanatec describes it as a refinement of the original, with redesigned electronics.

There’s a number of changes from the previous model. Firstly, the V2 features the new Simplified Quick Release system. Players can swap the wheel on and off the wheelbase by hand, with no tools.

In addition, there’s a revised shifting mechanism, the bite-point mode that allows you to determine the optimal bite-point before the start of the race​ and initiate the perfect launch every time.

The CSL Elite Steering Wheel McLaren GT3 V2 is fully licensed for Xbox One and Xbox Series consoles but can be used as well with your new PS console and PC. 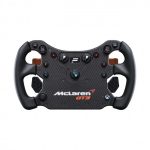