All this time you´d been praying for this, and finally Fanatec listen, the officially licensed Nascar steering wheel for the most realistic oval racing experience (screams), if you love Nascar this will blow your mind, is a bundle of the ClubSport Steering Wheel Universal Hub for Xbox One and the Podium Wheel Rim Nascar.

Recently I was able to try it, with a diameter of 35mm is perfect to drive in games like iRacing, the best ever create NASCAR simulator for professional and amateur Racers, but don’t get me wrong, the list of games you can play with this rin is extensive, Project CARS, FORZA MOTORSPORT, RFACTOR 2, You name it.

The rim is made in brushed, anodised aluminum and covered in genuine Alcantara, The performance and the feedback you get in the game is amazing, I was very impressed on how it feels like a real NASCAR racing car.

A direct look of the Brand New Fanatec Steering Wheels, including the Fanatec Nascar wheel. The large 35 cm diameter and dished, three-spoke design is ideal for driving modern NASCAR vehicles, the Clubsport NASCAR provides an endless choice of shifter paddles, With the Universal Hub pre-assembled and two sets of large paddle shifters and small paddles. The paddle system can be removed entirely for better access to the optional ClubSport Static Shifter Paddles too.

Note: If you use one of the above-mentioned wheelbases this steering wheel will be natively compatible with Xbox One® and Xbox Series X.  PS4 can be limited by the capabilities of the console (subject to firmware/OS changes and developer support). The full functionality can only be guaranteed on PC; this is also game-dependent. For a very specific simracing niche, this rim was made for oval racing in mind, not for nothing is an officially licensed NASCAR steering wheel, if you are a die-hard enthusiast of titles like iRacing, factor, project cars then this steering wheel is for you,  If you are planning to acquire a new steering wheel for oval racing this is the way to go, take in place that you need a compatible Fanatec sim-base to make this works for you.

For further, this Clubsport steering wheel is compatible with PC, PS4, and Xbox One, including the brand new Series X, the materials are luxurious and durable, in the game the level of immersion that you get is out of this world, also has a great level of customization with integrated buttons on top of the universal hub or additional buttons wherever you want. From my own experience I think is money well spent. 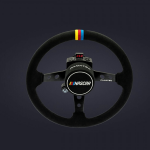